You can view the current weather and see if there is a hurricane warning in effect here.

A hurricane is a tropical storm with cyclonic wind speeds greater than 74 miles per hour. Hurricanes and tropical storms have had a major impact on Bermuda. Indeed it was a hurricane that led to the colonisation of the island by Sir George Somers and the crew of the Sea Venture in 1609.

Despite this, the risk posed by hurricanes to visitors is fairly minimal. Most hurricanes formed in the Atlantic move west to the Caribbean or the southeast coast of US. They then move north and then northeast, roughly following the path of the Gulf Stream. Most miss Bermuda completely. The island has an area of just 21 square miles and is an extremely small target. The chance of a hurricane passing directly over Bermuda is remote, though it has happened.

There is a common perception in the United States that the island is prone to hurricanes. It has arisen because the Bermuda is the only landmass in a large area of the Atlantic. It is therefore frequently referred to in media reports about hurricanes, despite the fact that most of these storms will have no effect on the island.

Historically Bermuda has been affected by a hurricane every 2 years, though usually the damage and disruption is minimal. Over the year islanders have learnt to deal with them quite successfully. The early settlers built using wood and soon discovered this wasn’t suitable. All occupied buildings are now constructed using stone or concrete and most have shutters, and high impact windows and doors. Unlike much of the United States, there are no flimsy wooden houses in Bermuda.

In a severe storm power outages are fairly common. Around 45 percent of the cables that deliver power to homes are overhead. Outages occur when these come into contact with trees and flying debris. There may also be shore erosion, and damage to vegetation and street furniture. Buildings and houses are usually largely unaffected.

Historically a devastating storm hits the island every 7 years. Hurricane season officially runs from June 1 to November 30, though in recent years the island has mainly been affected in September and October.

The table below shows all the hurricanes that have affected Bermuda since 1990. Only Fabian, and to a lesser extent Gert and Karen, have caused significant damage.

Fabian hit Bermuda on September 5 2003 and was the most destructive hurricane the island had seen since 1926. The Category 3 hurricane scored a direct hit on the island with recorded wind speeds peaking at 164 miles per hour.

The hurricane developed from a tropical wave that formed off the western coast of Africa on August 25. This wave moved west towards the Cape Verde and two days later developed into a tropical depression.

Click here to view our guide to Bermuda's golf courses.

The Bermuda Weather Service issued a Hurricane Watch on the morning of September 4. This was upgraded to a Hurricane Warning in the afternoon. Government offices and schools were closed and businesses sent workers home. Cruise ships left the island and all flights were cancelled.

On September 5 islanders awoke to a beautiful sunrise. It was just the calm before the storm. Light showers began just after 8 am. By 9.30 am wind speeds had reached 40 miles per hour and the first thunderstorm was reported.

Wind speeds peaked in the late afternoon with average wind speeds of 120 miles per hour and a peak wind speed of 164 miles per hour. The lowest air pressure was recorded at 5.30 pm, indicating the closest point of approach of the eye. Air pressure began to rise at 6 pm as the eye moved away from the island. By 11 pm wind speeds in Bermuda had dropped to tropical storm force.

Fabian caused significant damage to the island. Tragically, it was also responsible for four deaths. A car with three police officers stalled on the Causeway, the bridge linking the main Bermuda Island to St David’s Island. A civilian was stranded in a second car behind them. Waves washed the vehicles into the sea, despite valiant attempts to save them. Fabian became the first hurricane to cause loss of life in Bermuda since 1926.

The hurricane caused significant damage to vegetation. Thousands of invasive casuarina trees at golf courses and elsewhere were lost, although endemic trees like Bermuda cedars and palmettos faired extremely well. The infrastructure of the island was also hit hard. Sections of the South Road in Hamilton Parish and Smith’s Parish were torn up, 25,000 homes lost power, and many buildings were damaged. Fabian also destroyed the Natural Arches at Tucker’s Town, finishing off the work started by Hurricane Gert in 1999.

Bermuda uses the Saffir–Simpson Hurricane Scale to classify hurricanes. Each category is exponentially more destructive than the previous. A category 2 hurricane has the potential for 10 times more destruction than a category 1 storm.

The chances of actually being caught in a hurricane while on a cruise ship are extremely remote. With modern technology it’s possible to monitor hurricanes in real time and predict their paths with reasonable accuracy. Ships will usually alter itinerary and avoid the storm completely. Even if the hurricane makes a radical and unexpected change in direction, there shouldn’t be any problems. Cruise ships can travel much faster than the speed at which hurricanes typically move.

In recent years changes in itinerary have meant that ships scheduled to visit Bermuda have been rerouted to the Bahamas or ports in Canada. Cancelled cruises are rare and only usually happen when the hurricane is threatening the port of embarkation. If the cruise is cancelled you will get a refund, though compensation for changes in itinerary may be limited to refunds of passenger taxes.

Residents of Bermuda should take the following measures before a hurricane strikes.

You may be directed or seek refuge in one of the official government hurricane shelters. The shelters are:

Shelters open up during the warning stages of the hurricane. Persons seeking shelter should take 3 – 4 days supply of food that doesn’t require cooking, water, bedding, a change of clothes, car keys, cash, credit cards, passports and other important documents. Before you leave your house or apartment, unplug appliances, and turn off the electric, gas, and water supplies.

The shelters do not accept pets. If you can’t find alternative accommodation leave them indoors with plenty of water and food. 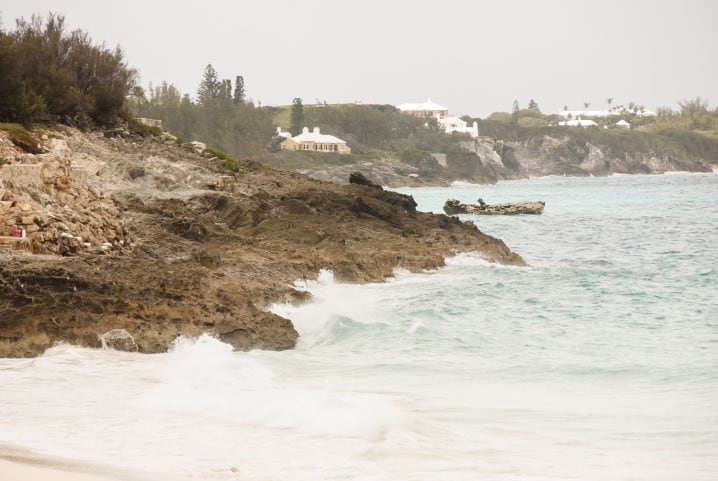 Find out what the weather is like in Bermuda now. Also includes a 5-day forecast.

Find out what temperature it is in Bermuda right now. View average air temperatures throughout the year. Get a rough idea how warm it will be on your vacation.