March is the last month of the off-season in Bermuda. Air temperatures are much the same as in February. The weather is still a little cool and you’ll need a light jacket in the evening. At this time of year hotels are offering good rates and airfares are at their lowest.

The water temperature is 20°C (68°F), too cold for most people for swimming and snorkelling. Visibility remains high at 150 to 200 feet, so diving with a full wetsuit is possible.

Daylight Savings Time begins on the second Sunday in March. The sun rises around 7.30 am and sets around 7.30 pm. Detailed sunrise and sunset times can be found here.

Seven hours of sunshine can be expected each day, around the annual average. Rainfall is just below the annual norm. Expect around four inches this month.

Events in March include the Bermuda International Film Festival. The Department of Tourism puts together a programme of smaller events (cookery demonstrations, walking tours, military ceremonies etc.) for low season visitors. Visit their website and search the events calendar for more information.

The Orange Ferry sails from Royal Naval Dockyard to St George. Click here to find out when it operates.

It’s also the last month of Bermuda’s seven-month lobster season. Make sure you visit one of the island’s seafood restaurants before then end of the month if you want to try Bermuda’s spiny variety.

The average temperature in Bermuda in March is 19°C (66°F), about the same as January and February.

The water remains cool. The temperature is much the same as it is in January and February.

In recent years, Bermuda has experienced around four inches of rain in March; one inch less than the annual average.

One of the coolest months of the year. Ideal for golf and tennis. 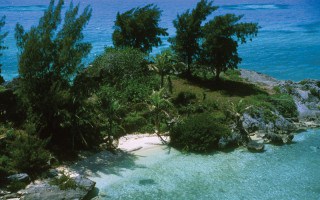