Skip to content
Bermuda 4u > Essential > Bermuda Weather > Bermuda Weather – September
For current weather conditions and a 5-day forecast click here. Though the chances are slight, September is the likeliest month for a hurricane.

The weather cools slightly in September from its August high. Although with a daily high air temperature of 29°C (84°F), September is one of the hottest months of the year. Most cruise ships are still visiting the island and although the summer season is drawing to a close, hotels are still charging peak rates.

The water temperature is around 27°C (81°F) and is great for swimming and snorkelling. Underwater visibility is around 100 feet and divers will feel comfortable in a shorty.

Expect around seven hours of sun each day, about average for the year.

Sunrise is around 7 am and sunset approximately 7.30 pm.

The only public holiday in September is Labour Day.

September is a pretty good month for deep-sea fishing with plenty of blue marlin and yellowfin tuna in the water. September 1 is the first day of Bermuda’s 7-month lobster season. You can now try Bermuda’s delicious spiny lobsters at restaurants.

The chance of a destructive hurricane is still quite small though and the island’s buildings are constructed to withstand them. Any damage tends to be to power lines, trees etc.

The average daily temperature in Bermuda in September is around 27°C (81°F).

The average daily high temperature in September is a respectable 29°C (84°F).

The average water temperature in September is 27°C (81°F), much higher than the annual average.

Expect around seven hours of sun on an average September day. 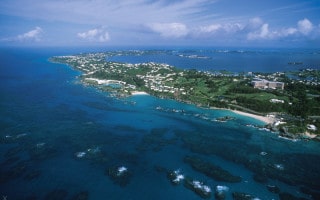 August is the hottest month of the year in Bermuda. Find out exactly how warm it’s likely to be.

October is the last month of the summer season but it’s still pretty good weather. Find out the likely air and water temperatures, humidity, hours of sun, and more.