Skip to content
Bermuda 4u > Essential > Crime and Dangers

Most visitors to Bermuda enjoy a trouble-free visit. The island has a relatively low crime rate and few natural dangers.

There was once a time when serious crime in Bermuda was virtually non-existent. Although this is no longer the case, crime levels have fallen considerably in recent years. The total number of crimes recorded in 2019 was the lowest this century. Bermuda is not a dangerous country.

The total number of crimes every year from 2000 to 2019 are shown in the table below:

Gang violence and gun crime rocketed in the first decade of this century.

Looking at the raw data for gun crime during this period might give the impression that Bermuda was a dangerous place for tourists to visit. The reality was very different.

Virtually all the gun crime related to disputes between a handful of gangs and individuals. Shootings were targeted and most took place in residential areas frequented by the gangs concerned. No tourists were killed or injured, or, as far as we are aware, even witnessed these acts.

In 2017 the government launched a plan to tackle gun and gang violence, forming a dedicated Gang Violence Reduction Team.

The plan has been a great success and the level of gun crime and gang violence has sharply decreased.

At the beginning of 2020 the Bermuda Government announced that there were no murders recorded in Bermuda in 2019.  For 2019 at least, Bermuda was the country with the lowest murder rate in the world. It is not a dangerous country.

Burglaries from hotels and guest houses are quite rare. In 2013 there were just 11 crimes of this nature.

Nevertheless, take sensible precautions such as keeping and valuables in a safe and locking doors and windows.

Scooter theft is relatively common in Bermuda. Local youths like to take the bikes and go joyriding, usually riding them on remote roads and causing significant damage.

All scooter rental companies will provide you with a steel U-lock. They’re virtually impossible to break and will reduce the chances of your scooter being stolen to almost zero. If the scooter is stolen you could be liable for a proportion of its cost.

Robberies surged a few years ago with many bag snatches recorded. Pitts Bay Road in Pembroke and Court Street in Hamilton were some of the most favoured locations for thieves.

Installation of CCTV cameras in these and other areas have reduced robberies and other crimes significantly.

Visit the beach (or anywhere else) and you won’t be approached by locals trying to sell you drugs or other services.

There are few dangerous areas in Bermuda. The area around Court Street in the north of Hamilton, known locally as Back o’ Town, has a reputation for drug dealing and other crimes. We wouldn’t class the neighbourhood as particularly unsafe or threatening, though we would advise exercising caution if visiting.

Bermuda has not witnessed any acts of terrorism. The island has very strict controls over its borders and is geographically isolated. It would be extremely difficult for terrorists to import weapons, explosives etc.

Furthermore the Bermuda Government does not get involved in international politics, wars, conflicts, and disputes. The country is simply not a target for terrorist groups.

Rip currents do form on beaches in Bermuda (and indeed many beaches around the world). They’re not particularly dangerous, provided you know how to handle them.

They’re created when incoming waves cause water to build up on the shore. The water tries to return to the ocean but is prevented from doing so by more waves. The water then moves sideways until it finds a spot where it can return. A fast moving channel of water heading out to the ocean then forms.

Rip currents are fairly easy to spot. Look for a small flat section of water between waves.

The most common mistake a person caught in a rip current makes is to try and swim directly towards the shore. However, this is difficult for even the most competent of swimmers. The correct thing to do is go with the current until it dissipates, and then swim diagonally back towards the shore.

The Portuguese man-of-war is occasionally found in Bermuda, particularly on the southern beaches such as Horseshoe Bay and Elbow Beach. It looks like a jellyfish, but isn’t. It’s a siphonophore, an organism made of up many smaller organisms. A jellyfish is a single organism.

Its most distinctive feature is its body; a gas-filled balloon like translucent float. This isn’t the dangerous part though. The thing you need to worry about is the tentacles that dangle beneath. They can reach about 150 feet in length and bear toxic cells for stinging and killing prey (shrimp etc.).

Though not the intended target, they do sting humans. In most cases a sting will cause severe pain and discomfort. Death is extremely rare.

Portuguese men-of-war tend to travel in large numbers. They’re difficult to spot in the water but if they’re about you’ll see some washed up on the shore.

Stings are actually quite rare. Each year around 30 people seek treatment at the King Edward VII Memorial Hospital. The island has a population of over 60,000 and receives around 500,000 visitors each year. Given that many locals visit the beach regularly and most visitors will also take a dip in the ocean, the chance of getting stung are fairly remote.

If you’re still concerned about the Portuguese man-of-war then visit one of the beaches with lifeguards (e.g. Horseshoe Bay). The lifeguards are trained to deal with the stings and can get you to hospital if necessary. 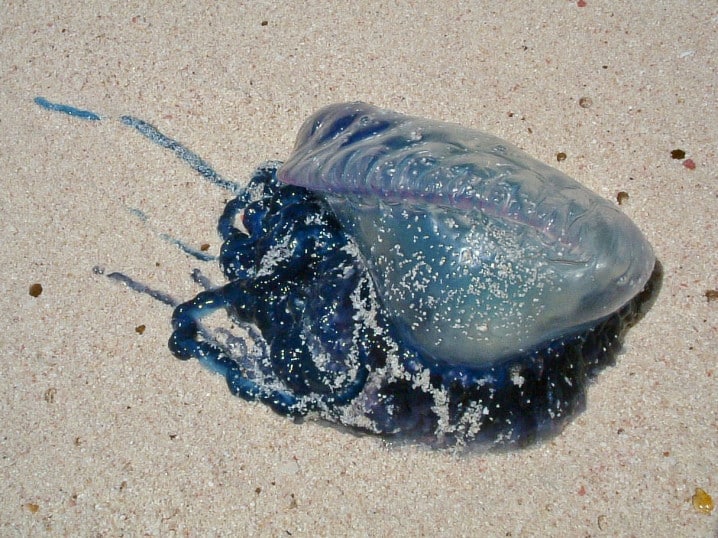 Sharks are fairly prevalent in the ocean around Bermuda. Common types found in the waters around the island include Galapagos and tiger sharks.

Despite public perception, sharks will usually try and avoid contact with humans. They rarely come close to the shore, preferring to hang around the reef line and beyond. Many water sports operators in Bermuda report never having seen one.

Globally, shark attacks are extremely rare. In 2019 the International Shark Attack File (ISAF) reported only 64 unprovoked shark attacks in the entire world. Only 2 of these were fatal.

US visitors should be more concerned about being attacked by a shark in their own country. Of the 64 unprovoked attacks in 2019, 41 (64%) took place in the US. 11 (17%) attacks were recorded in Australia. The Bahamas ranked third highest in list with 2 attacks (one of which was fatal).

The likelihood of being attacked by a shark in Bermuda is very remote.  The last reported shark attack was a minor incident many decades ago.

There are no snakes, dangerous spiders, poisonous bees, or any other dangerous wild animals in Bermuda.

Some snakes have accidentally been brought to the island in luggage, golf bags etc. No breeding populations have been established.

The island is occasionally affected by hurricanes. Hurricane season runs from June 1 to November 30. For more details see our special section on hurricanes.

Most tourists choosing not to travel by public transport, rent a scooter. Many will be unaccustomed to driving scooters.

Visitors should be aware that road conditions are considerably different to the US and Canada. Most roads are narrow, winding, and undulating. Although the maximum speed limit is 35 km/h (25 mph), it is widely ignored.

The island has an excellent public transport system. Fares are cheap and services frequent. It is also a small island; with an area of just 21 square miles. There is almost no location not within easy walking distance of a bus or ferry stop.

Bermuda has an advanced healthcare system and there are no particular health risks associated with a trip to the island.

Visitors should be aware that weather may be different to what they are accustomed to. Strong sunshine, high air temperatures and humidity in the summer months can lead to dehydration and sunburn. Apply sun cream, drink plenty of water, and cover up to minimise any problems.

In 2006 smoking was banned in indoor public spaces.

The vast majority of visitors to Bermuda come from the US, Canada, and the UK. Citizens of these countries can seek government travel advice from the following websites:

All have special sections dealing with potential dangers in countries around the world, including Bermuda.

Governments concerned will post specific travel advisories, warnings, and details of threats to their citizens on these pages.

Find out about the island’s health service, hospital, pharmacies, prescriptions, and health risks.