Throughout the 2018 season there’s a good choice of cruises to Bermuda from New York (NY).

The ships sailing to the island are the Anthem of the Seas, Norwegian Escape, and Celebrity Summit. All ships dock at Royal Naval Dockyard (King’s Wharf/Heritage Wharf).

A 10-night Bermuda and New England cruise is also offered. The departure date is June 17.

The ship departs Cape Liberty on Thursday at 4 pm and docks in Bermuda (Heritage Wharf, Royal Naval Dockyard) at 8 am on Saturday. She departs Bermuda at 4 pm on the same day.

A 7-night cruise to Boston and Bermuda is also available. The ship departs from Cape Liberty on November 3.

A 7-night cruise to Bermuda is also offered, departing Cape Liberty on November 10.

A 4-night cruise to Bermuda, departing 6 December, is also available.

NCL’s Norwegian Escape will cruise to Bermuda in 2018, replacing the Norwegian Breakaway.

The ship departs from New York on Sunday at 4 pm, arriving in Bermuda at 8 am on Wednesday. She leaves Bermuda at 3 pm on Friday, after spending two nights in port. She returns to New York at 8 am on Sunday. 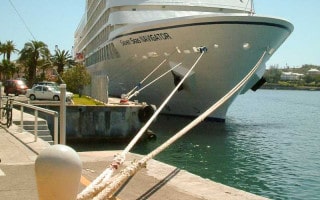 What happened to the cruise ships that used to dock in Hamilton?

Find out why the big cruise ships no longer dock at Hamilton.