Steve Pike, senior writer for PGA.com, says that Bermuda’s Mid Ocean Club ‘rightfully ranks among the world’s best’. And don’t just take his word for it. Dwight Eisenhower, Winston Churchill, George Bush and Babe Ruth have all walked the fairways of this magnificent golf course.

The Mid Ocean Club is located in an exclusive area known as Tucker’s Town. Originally designed in 1921 by Charles Blair Macdonald, it received its final touches of perfection in 1953 by architect Robert Trent Jones.

Some of the holes run along the coast, but most run through valleys with water only an occasional hazard. One exception is the signature 5th; a 433 yard par 4 where you look down across Mangrove Lake to the green. It was in this body of water that Babe Ruth was said to have lost a dozen balls in in his vain attempts to play it.

Mid Ocean is the only club on the island where caddies are available. They’re a great idea, especially if it’s your first time round the course. Some of the greens are quite difficult to read and have deceiving false fronts. A knowledgeable caddy will almost certainly help you get that par in the bag.

It’s a common misbelief that only members can play the course. Although it is a private and somewhat exclusive club, tourists are welcome to play on Mondays, Wednesdays, and Fridays. Tee times can be booked up to 3 months in advance.

As Steve Pike says ‘playing the exclusive Mid Ocean Club might be your finest hour as a golfer.’

The clubhouse features a fantastic dining room offering fabulous food, a bar, function rooms, locker rooms, and a golf shop. Other facilities include a beach club with swimming pool and restaurant, tennis courts, and guest rooms. The staff are known for their friendliness, with many employed here for decades.

Proper golf attire and soft-spiked golf shoes are mandatory. Clubs and shoes can be hired if required.

The Mid Ocean Club is situated in Tucker’s Town and falls within both Hamilton Parish and St George’s Parish. The closest hotel is Rosewood Tucker’s Point.  Grotto Bay is also nearby. 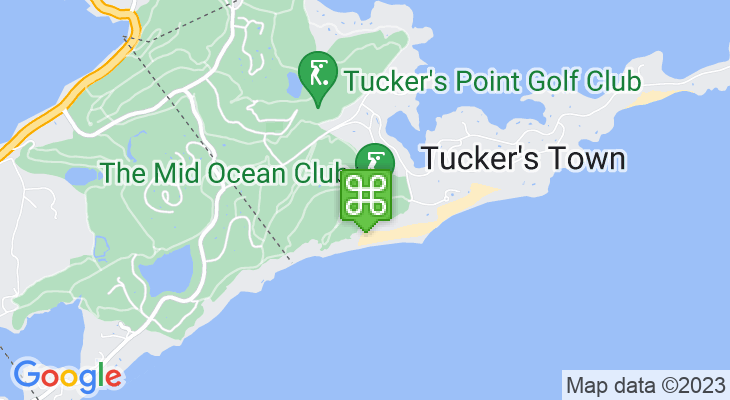