Devonshire Parish lies at the very centre of Bermuda, bordered by Paget and Pembroke to the east, and Smith’s to the west. It’s a predominantly rural and residential area with a population of just over 7,000. It has few tourist attractions, no major beaches, and no hotels.

The parish takes its name from William Cavendish, the 1st Earl of Devonshire (1552 – 1626), one of the investors in the company that colonised the island at the start of the 17th century.

Ariel Sands closed in 2008, leaving Devonshire Parish with no hotel accommodation. Options nearby include the Elbow Beach hotel in Paget Parish and the Hamilton Princess in Pembroke Parish.

Places To Visit & Things To Do

Palm Grove Gardens is a large estate owned by Sir David Gibbons. Sir David is a former Premier and a member of a prominent local family that owns companies such as Capital G, Colonial Insurance, and the Gibbons Company department store. The family generously open the gardens to the public on weekdays and, best of all, admission is free. It’s a beautiful place to visit and boasts sweeping lawns, a fine collection of palms, an aviary, and a unique pond.

Devonshire Bay Park lies just east of Palm Grove Gardens and is a pleasant spot for a family picnic. It features the remains of an old fort and a small, sheltered beach.

The Arboretum is one of our favourite parks on the island. It was established after the British Army pulled out of the area and is home to a collection of trees and shrubs from around the world. Despite its beauty, the park attracts few visitors. Most times you’ll find just a few walkers and fitness enthusiasts here.

The Ocean View Golf Course is one of two government-run courses on the island. With just 9 holes it undoubtedly plays second fiddle to its more famous sibling, Port Royal. The course does have its fans though and is also the cheapest place to play golf in Bermuda.

The World Rugby Classic is one of the signature events on the island’s sporting calendar. It takes place every November and features teams made up of former international players. It’s held at the Bermuda National Sports Centre, a sports complex with a multi-purpose sports field, athletics track, and an Olympic-size swimming pool.

The parish could no way be regarded as a shopping mecca, but it is home to one of the best supermarkets in Bermuda. Lindo’s Market is situated on Watlington Road East in the heart of Devonshire and enjoys a good reputation for the quality of its fresh produce. It also boasts an in-store pharmacy.

The Esso Collector’s Hill Tigermarket is a gas station with a pretty good convenience store and a small deli. It’s situated on South Road, around ½ mile east of Devonshire Bay Park.

Devonshire Parish is crossed by Bermuda’s three main roads; North Shore Road on the northern coast, Middle Road through the central area, and South Road on the southern shore.

Several buses cross the parish on their journey from Hamilton to St George:

Those wishing to travel to the National Sports Centre should take bus 9 from Hamilton.

There is no ferry service to Devonshire. There are also no taxi stands in the parish.

Devonshire Post Office is situated on Orange Valley Road, just east of the Arboretum. It’s open Monday to Friday, from 8 am to 4 pm.

There’s an HSBC Bermuda ATM at Lindo’s Market. The HSBC cash machine at the Esso Collector’s Hill Tigermarket was taken out of service in 2013.

The US Consulate is situated on Middle Road and issues visas, passports, and can provided assistance to US citizens in difficulty.

Interactive map of Devonshire Parish. Click on any icon for further information. 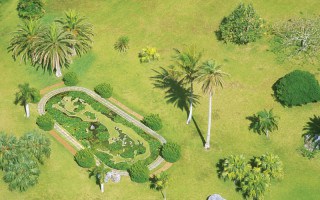