The fort was been rebuilt several times over the next three centuries; first in the early 1700’s, and most recently in the 1860’s and 70’s. The last development saw the British Royal Engineers build concrete firing positions and fit them with huge 18 tonne 10 inch rifled muzzle-loading (RML) guns. Their purpose was to defend the approach to Royal Naval Dockyard. The guns are extremely rare. Most other examples, in Britain and elsewhere, were melted down after becoming obsolete.

In the first half of the 20th century the fort had fell into disuse, but since 1951 has operated as a museum and national park. A huge refurbishment project by the Department of Parks was completed in the summer of 2012. There are new exhibits on display, better signage and information, and many areas, previously off limits, have been opened up.

Visitors access the fort via a wooden bridge that crosses a defensive ditch. Displays in the main exhibition area include replicas of the Crown Jewels, period weapons, models depicting the fort’s evolution over time, and the history of forts throughout Bermuda.

Bus route 7 is the most scenic bus route in Bermuda. See the island's most beautiful views for just a few dollars.

Tunnels and stairs lead into the depths of the fort where you can view rooms where the munitions were stored and the lifts used to transport the cartridges to the gun floor. You can also visit the keep and see the soldier’s sleeping area, plus mock-ups of the kitchen and mess hall. The views from the ramparts are simply stunning.

If you only have time to visit one fort while in Bermuda, try and make it this one. Admission is just $7 for adults and $3 for children aged 5 to 15. Kids under 5 enjoy free admission. It’s open Monday to Friday (7 days a week in the summer) from 10 am to 4 pm (last entry).

Fort St Catherine is one of the few attractions on the island that’s not within easy walking distance of a bus route. The nearest bus stop is in St George (on routes 1, 3, 6, 10, and 11). Most reasonably fit people could complete the walk from the town in about 15 minutes. On the way you’ll pass the Unfinished Church. If you don’t want to walk, go to King’s Square and get a taxi or take the private minibus service.

There are several beaches within walking distance. St Catherine’s Beach lies immediately to the east and Achilles Bay to the west. Both are usually quiet. The Beach House (formerly Blackbeard’s Hideout) is a casual restaurant and bar overlooking Achilles Bay offering reasonably priced meals and drinks. Tobacco Bay is also fairly close by and is one of the best beaches on the island for snorkelling.

The fort is one of many in St George’s Parish. Some are ruined or inaccessible but those open to the public include the Alexandra Battery, Gates Fort and Great Head Battery. St George and its related fortifications are a UNECSO World Heritage Site.

Tourist attractions and things to do near Fort St Catherine include:

Restaurants and places to eat and drink near Fort St Catherine include: 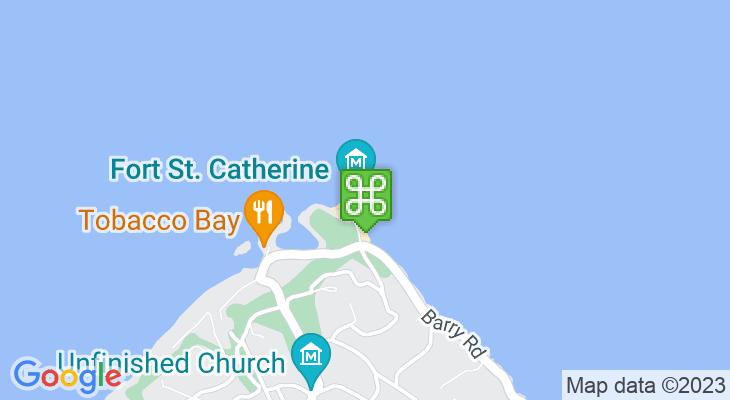 Well-maintained fortress on the outskirts of Hamilton. Offers great views of Hamilton Harbour.