Horseshoe Bay is undoubtedly the most popular beach in Bermuda. It’s got the best facilities, is big enough to accommodate large crowds, and is easily reached from the cruise ship terminals at Dockyard and many hotels.

It’s arguably the most beautiful, but there are many others that would give that accolade to Warwick Long Bay, Elbow Beach, or Jobson’s Cove. TripAdvisor users seem to think so though. In 2013 they voted it the 8th best beach in the world.

Horseshoe Bay is situated in Southampton Parish. It is part of a network of beaches that run along the southern shore of the island and are collectively referred to as South Shore Park. From west to east the major beaches in the park are Horseshoe Bay, Chaplin Bay, Stonehole Bay, Jobson’s Cove, and Warwick Long Bay. They are close together and linked by a coastal trail. So if you arrive at one beach and it’s not for you, it’s really easy to move to another.

The beach is named because it’s supposedly shaped like a horseshoe. It’s actually more of a gentle crescent though. Like most of the beaches on the south shore it’s also known for its soft, pink sand. The water is crystal clear and the sand is regularly cleaned and is free of stones.

There are actually two beaches at Horseshoe Bay. The main (crescent-shaped) area lies to the east of the main entrance and stretches for around 1/3 mile. To the right is Port Royal Cove, a sheltered cove with calm, shallow waters. It’s great for children and is also known as Baby Beach. The beaches are separated by a large rock formation. Adventurous visitors like to climb it and dive into the ocean. It’s also a good vantage spot and an excellent place to take panoramic photos of the beach.

The Horseshoe Bay Beach Cafe is situated near the main entrance to the beach itself. It’s essentially just a fast food outlet selling burgers, hotdogs, fish sandwiches, French fries, ice cream, soft drinks, and water. Prices are reasonable for Bermuda but more than you would pay in the US. It’s not gourmet food but is perfectly acceptable for the beach. If you’re looking for more upmarket beachside restaurant or bar try Mickey’s at Elbow Beach.

There’s also a beach rentals facility here. Prices in 2014 are $11 per chair/umbrella. You’ll need to pay a small deposit too (it’s returned when you take them back). They sell towels but don’t rent them. There’s nothing to stop you bringing your own chairs and umbrellas other than perhaps an over-zealous bus driver who could, theoretically, ask you not to board with them.

Find out how warm the ocean is. Temperatures updated hourly.

A shower and toilet block is also near the main entrance. It’s clean and free to use. The showers are particularly welcome and mean that you don’t have to return to your cruise ship or hotel to get spruced up.

There are a couple of hazards that need pointing out; rip currents and the Portuguese Man o’ War.

Rip currents are reasonably common on the main beach. They form when multiple waves hit the beach and water builds up. The water attempts to return to the ocean but is forced sideways by more incoming waves. It runs along the shore until it finds and escape route, and forms a fast moving channel of water flowing back out into the ocean.

It’s fairly easy to spot a rip current if you know what you are looking for. They flow seaward and counteract the incoming waves, resulting in a deceptively flat and calm-looking area of water. They are more powerful at the surface and will drag you out into the ocean but not under. If caught in one, the best action to take is to remain calm and allow the current to pull you. Its power will dissipate and then you should swim parallel to the shore until you are clear of it, and then return to the beach.

The Portuguese Man o’ War looks like a jellyfish but isn’t. It’s a siphonophore and is composed of many smaller organisms. A true jellyfish is a single organism. The most distinctive feature of a Portuguese Man o’ War is the gas-filled bladder that allows it to float. It’s has a bluish colour and is translucent. This isn’t the dangerous part though. What you should be worried about is a sting from its tentacles. They can be fatal, but this is rare.

Fortunately Horseshoe Bay is one of the handful of beaches in Bermuda where lifeguards are on duty (May to October only). They are stationed at the centre of the main beach and keep their eyes peeled for swimmers in difficulty. They also have the knowledge and equipment to treat anybody unfortunate enough to have been stung by a Portuguese Man o’ War.

Horseshoe Bay can get busy in the summer, especially on days when cruise ships are visiting the island. Most of the ships that visit regularly spend three days at Royal Naval Dockyard (Kings Wharf/Heritage Wharf). Most cruise ship passengers will visit Horseshoe Bay on day one or day two, and will spend their final day at Dockyard.

Although there will be many people visiting the beach at peak times, it only gets really busy close to the main entrance and the café. Just walk to the far end and you’ll almost certainly find a lot more space.

To reach Horseshoe Bay by public transport you will need to take bus number 7 (Dockyard – Hamilton). The stop at Dockyard is very close to the cruise ship terminals (Kings Wharf/Heritage Wharf). You really can’t miss it. The adult one-way fare is just $4.50 if you pay in cash (less if you buy a token, transportation pass, or book or tickets). There are no ferries to Horseshoe Bay.

The bus stop is at the top of an access road, and is about 1/3 mile from the beach itself. If you don’t fancy the walk the ‘To the Top’ shuttle service costs just $2.

The taxi fare from Dockyard to Horseshoe Bay Beach will be about $33. From Hamilton the fare will be around $22. Various private minibuses also provide a shuttle service from Dockyard. Taxis and minibuses will drop you off on the car park, which is next to the beach.

Cruise ships passengers should be wary about visiting Horseshoe Bay on the day their ship departs. Bermuda has good bus and taxi services, but if a few hundred cruise ship passengers decide to leave the beach just before their ship departs, they will become swamped. Don’t forget the bus to Dockyard is coming from Hamilton and will already have picked up passengers in the capital and from other popular spots before it even reaches Horseshoe Bay. We’d strongly advise you to spend your last day visiting the attractions at Dockyard or at least give yourself plenty of time to make it back to the ship.

Tourist attractions and things to do near Horseshoe Bay include:

Restaurants and places to eat and drink near Horseshoe Bay include:

Hotels near Horseshoe Bay include: 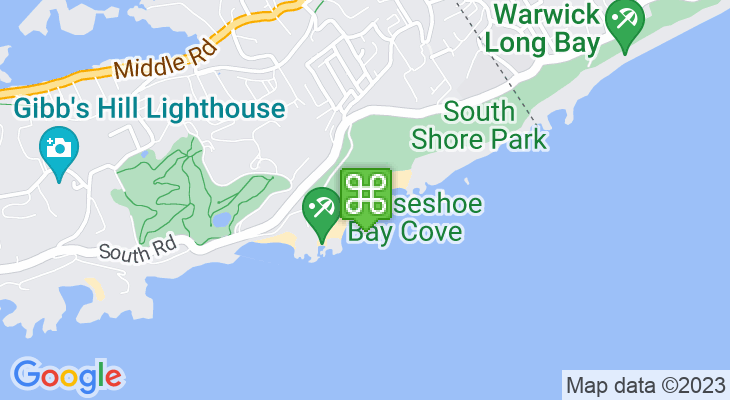 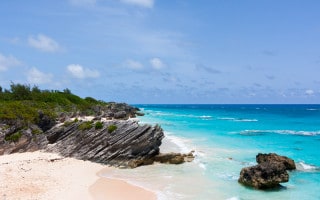 Small beach in Southampton Parish. Good place to come if you visit Horseshoe Bay and it’s too busy for you. 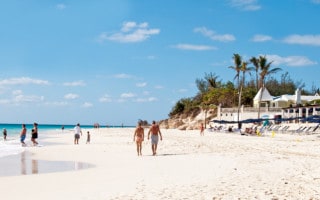 One of the best beaches on the island. Close to Hamilton and not as crowded as Horseshoe.