Spittal Pond Nature Reserve is the largest and most easily reached nature reserve in Bermuda. The reserve hugs the south shore and is jointly owned by the Bermuda National Trust and the Bermuda Government. At its centre is Spittal Pond, without doubt the best birdwatching location in Bermuda.

There are two entrances to the reserve, both on South Road. Most visitors use the entrance on the western side (near Spittal Pond Dairy Farm).

From the parking lot follow the trail through the woods. Here you will find endemic Bermuda cedar and prickly pear cacti. After emerging from the wooded area you see Spittal Pond on the left. The water is tidal but approximately 6 hours behind the ocean flows due to the delay caused by rock filtration.

In the fall and winter months the reserve becomes the temporary home of a multitude of migratory shorebirds and waterfowl. Common sights include American black duck and blue-winged teal. Permanent residents include the white-eyed vireo and yellow-crowned night heron. The pond itself is a wildlife sanctuary, off-limits to the general public and protected by a fence.

The Checkerboard is an unusual geological formation on the coastline. It is a large, flat slab of limestone with weathered grooves dividing it into clearly defined squares.

Further up the path is Portuguese Rock, the earliest sign of humans in Bermuda. Some initials and the date ‘1543’ were inscribed here. The initials are difficult to decipher and were originally thought to be TFP; interpreted as standing for the work of Spanish sailor Theodore Fernando Camelo. Later research suggests they read RP and stand for Rex Portugaliae (King of Portugal), indicating that Portuguese sailors were once shipwrecked here. Their fate is unknown since no evidence of human settlement was noted by Sir George Somers when he arrived on the island in 1609.

The original rock was destroyed by weathering and vandalism and a bronze cast now marks the spot. In April and May it’s a good vantage point to watch humpback whales migrating from the Caribbean to their summer feeding grounds in the north Atlantic. In the spring and summer longtails can be seen swooping around the cliffs.

Close to the Portuguese Rock is a cave formation with an overhead entrance. It’s called Jeffrey’s Hole after a slave who once hid here after escaping from his master. Bermudian folklore states that the owner gave up the search for Jeffrey after several weeks of searching, presuming he must have fled the island on a ship. Subsequently, the owner noticed one of his female slaves leaving his property with a small parcel. He decided to follow her and discovered she was taking food to the cave where Jeffrey was hiding. The fate of slaves is unknown.

Entrance to the reserve is free. It’s open every day from sunrise to sunset. To get to Spittal Pond by public transport take bus number 1 from Hamilton to St George.

There’s a good grocery store at the eastern end of Spittal Pond where you can purchase all the supplies for a picnic. Other attractions in the area include the beach at John Smith’s Bay and Verdmont.

Tourist attractions and things to do near Spittal Pond Nature Reserve include:

Restaurants and places to eat and drink near Spittal Pond Nature Reserve include: 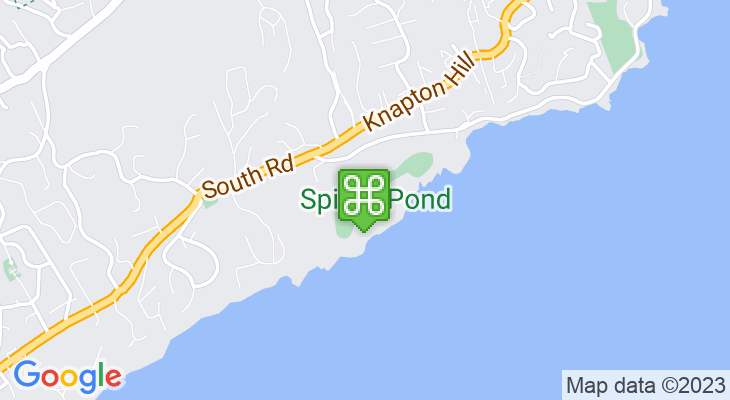