Route 7 runs from Hamilton to Royal Naval Dockyard (Kings Wharf/Heritage Wharf) and is arguably the most picturesque bus route in Bermuda.

Route 8 also goes between Hamilton and Dockyard but takes a less interesting route along Middle Road.

The bus leaves the Central Terminal in Hamilton and travels along East Broadway, passing the Bermuda Underwater Exploration Institute. It then goes into Paget Parish, stopping at the King Edward VII Memorial Hospital and the Botanical Gardens (Masterworks Museum of Bermuda Art and Camden).

Find out how warm the ocean is. Temperatures updated hourly.

The bus then joins Middle Road and takes the same route as bus number 8 to Dockyard, passing through Southampton and Sandys. Attractions and hotels on this stretch of the route include the Port Royal Golf Course, the Pompano Beach Club, Hog Bay Park, Somerset Bridge, Fort Scaur, Somerset Long Bay, and Cambridge Beaches.

The complete trip from Hamilton to Dockyard takes around one hour. The first bus departs from Hamilton at 7 am with services running approximately every 15 minutes.

It should be noted that some buses on this route only go as far as Barnes Corner in Southampton Parish. Check the sign on the front of the bus or the official schedule for clarification.

There’s also a ferry service between Hamilton and Dockyard. Many visitors chose to do one leg of the journey on the bus and return on the ferry. If you’ve bought a transportation pass it’s valid for both modes of travel.

Approximate journey times from Hamilton to selected destinations on this bus route are as follows:

The map below shows the route followed by buses on Route 7. The map is interactive. Click on any point of interest for further information. 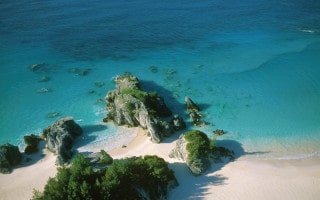 There are 11 bus routes in Bermuda, covering all areas of the island. See detailed route maps, schedules, journey times, and more.

Bus fares in Bermuda are pretty cheap. You can pay in cash on the bus, or save even more money by buying a transportation pass, tokens, or a book of tickets.

Simplified bus timetable showing frequency, plus start and finish times for all services. 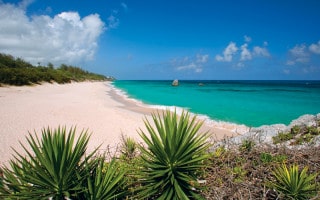 The longest beach on the island stretches for more than half a mile. It’s extraordinarily beautiful, but rarely crowded.