Tourists in Bermuda cannot hire cars. The only form of independent, motorised transportation in Bermuda available to tourists is rental scooters and mopeds. Strictly speaking, a moped carries one person, whilst a scooter is more powerful and can carry a passenger. The two terms are frequently used interchangeably.

No licence is required for tourists but drivers must be 18 years old. Children can sit on the back as passengers.

Although fuel is expensive in Bermuda, it doesn’t take much to fill a scooter’s tank and the bikes use very little gas. Most gas stations are open 07:00 – 19:00 but the Esso City Auto Market in Hamilton is open 24 hours. The Department of Tourism’s map, widely available on the island, shows the locations of all gas stations.

Despite some safety concerns, hiring a scooter is a great way to explore the island. It’s quite remarkable many attractions can be seen in one day when riding one.

Wheels Cycles is no longer in business.

All cycle companies in Bermuda are required to provide a short riding lesson before hiring a scooter to a tourist. Those who don’t feel confident after the lesson should feel free to cancel.

A helmet, lock, and luggage basket come as part of the hire package. Companies will gladly deliver and collect the scooter from your hotel or cruise ship.

Scooter riders sustain over 80 percent of traffic related injuries in Bermuda. Tourists are more likely to be involved in an accident than residents.

Measures to improve road safety have reduced the number of casualties in recent years. In 2011 there were 9 road deaths, the lowest figure since 2004. In 2012 there were also 9 fatalities on the road. In the first 6 months of 2013 there were 5 road deaths (see detailed statistics).

Despite the improving statistics, the decision to hire a scooter in Bermuda should not be taken lightly.

Scooters are inherently more dangerous than cars but in Bermuda additional factors come into play:

If you decide to rent a scooter, always wear a helmet. Shades or visors are also a good idea, as a flying cockroach in the eye can be quite a distraction when driving.

When on the roads it’s quite common to hear a lot of horns hooting. This can be rather distracting at first as you may feel that you are driving incorrectly. More often than not it’s merely Bermudians greeting their friends.

Getting lost isn’t really a problem. There are only three main roads in Bermuda and the island is just two miles across at its widest point. Drive for any distance and you will soon find one of them. 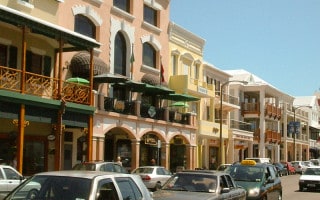 Find out why visitors are not allowed to hire cars in Bermuda.

We use cookies to ensure that we give you the best experience on our website. If you continue to use this site we will assume that you are happy with it.OkRead more